How to Make a Homemade Weed Killer 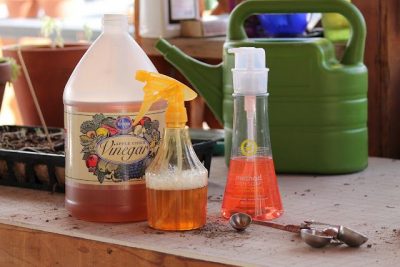 Having invested in native plants for their ecological benefits, many of our customers seek alternatives to commercial herbicides that will let them maintain and nurture a healthy environment. We are often asked about the safest and surest way to get rid of weeds. Pulling weeds by hand is always safest, and for small scale problems it is the best option. But there are times when herbicides may be more practical. Fortunately there is an alternative, a homemade weed killer made up of natural ingredients from the pantry that can get the job done.

Pour 1 gallon of white vinegar into a bucket. 5-percent household white vinegar is fine. It may take two or three days longer to kill the weeds with the lower concentration, but it does work.

Add 1 cup of table salt. Stir the solution with a long-handled spoon until all the salt dissolves completely.

Stir in 1 tablespoon of liquid dishwashing soap. The soap helps the vinegar and salt solution coat and adhere to the weeds.

Blend all thoroughly and then funnel the weed killer into a plastic spray bottle.

Vinegar. The active ingredient in vinegar is acetic acid. Household vinegar has an acetic acid concentration of about 5 percent. Acetic acid is a desiccant, meaning that when sprayed on the surface of a plant, it draws moisture out of the leaves, killing the top growth. Most effective on small or new weeds, it kills the top easily enough. Taprooted plants such as dandelions usually survive an application of vinegar. Acetic acid breaks down quicky in the soil, and the negative impact of vinegar on the soil last for only a short period. A stray drop of vinegar on a desirable neighboring plant will cause some browning, but probably will not kill it.

Salt. Sodium chloride, or table salt, is also a dessicant. Salt is added to weed killer recipes because it is stronger, and kills some plants that vinegar won’t kill. It negatively impacts the soil for a longer period of time than vinegar, and it may affect the roots of other nearby plants, as well.

Soap. Soap is a “surfactant,” meaning it increases the spread of vinegar or salt onto a weed’s leaves. It also can increase the absorption of desiccants because it can break down the protective waxy surfaces of some leaves.

This homemade weed killer recipe is “nonselective,” which means that it will kill any plant it is applied to. Apply the solution on a dry, sunny day, by thoroughly spray coating all surfaces of the weed. Plants soaked with this solution will die within a week. It is important to understand that in large doses, any chemical or compound plant killer will be toxic beyond the plant itself. A salt and vinegar solution is toxic to small mammals. It can destroy the soil microbiome, too, and care should be taken to avoid spilling the mixture directly onto the ground. If you are repeat-spraying a large solid patch of weeds consider following up with a soil-building and watering strategy, after the weeds have been eliminated, to rebuild the soil health. Any leftover weed killer can be funneled into an empty plastic container, capped  tightly and labeled. Store the left over solution in a cool dark spot indefinitely.

If you want to be 100 percent environmentally safe, then hands-on labor is the answer. Pulling weeds by hand is as routine for some gardeners as a cup of coffee in the morning. Hand pulling is infinitly easier under the right conditions. First, it’s easier to pull weeds as soon as they come up. Young weeds have small roots and are easier to pull, and your chances of getting the entire plant is increased. Second, it is way, way easier to pull weeds just after a soaking rain. A serious weed-pulling can be followed by a smothering layer (mulch, paper, plastic…depending on the situation) for a thoroughly effective eradication. Hand or trowel weeding can be the most effective, and it promotes healthier soil, as well.

Unlike vinegar or salt, which are topical, glyphosate herbicides are systemic. The chemicals are absorbed into the plant, spreading throughout the entire plant and down into the roots. Glyphosate herbicides (such as roundup) have been shown to be particularly toxic to bees. A study published by The National Company of Biotechnology Information, found glyphosate to have long term negative consequences on honeybee colony performances. Another study shows that it’s not just neonicotinoids that can impair bees’ ability to navigate (to nectar and pollen sources), but that glyphosate has also been found to have the same impact, even at low levels. https://www.boerenlandvogels.nl/sites/default/files/Effects%20of%20Glyphosate%20on%20Honey%20Bee%20Navigation.pdf.