Ten Things to Know about Trilliums 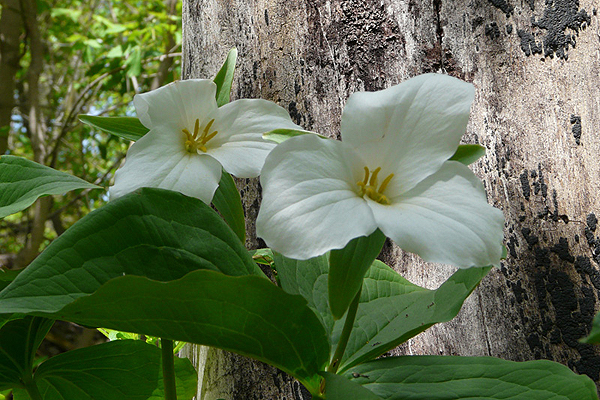 1. There are 39 native trilliums in the U.S. All trillium species belong to the Liliaceae (lily) family. Native to temperate regions of North America and East Asia, the genus ‘Trillium’ has 49 species, 39 of them are native to various areas across the United States.

2. The plants are extremely long-lived. Trilliums are relatively easy to grow from their rhizomatous root but slow to develop and spread. To make up for it, the plants can live for up to 25 years.

3. Early season sunlight is needed. Even though it is a woodland species, the dormant plant needs to be warmed by the early spring sun. It’s best to avoid planting them in a location that never gets sun (such as the north side of a building). 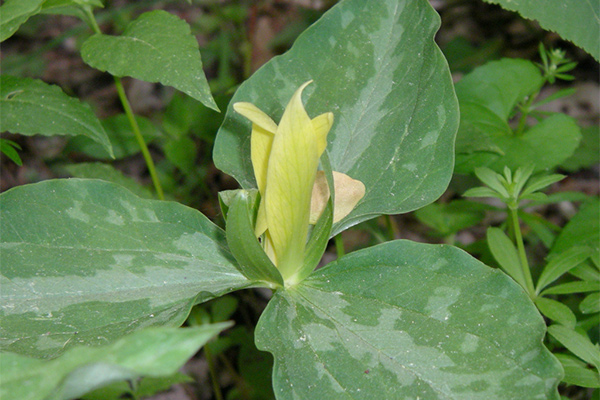 5. Traditional names for trilliums: Toadshade (for its resemblance to a toad-sized umbrella), Wakerobin (for its appearance with the first robins), and Birthroot (for its medicinal uses during childbirth).

6. Red Trillium (Trillium erectum) has no nectar and is pollinated by flies (Diptera) and beetles (Coleoptera). The petals of the flowers exude an odor that attract carion flies and beetles which pollinate the flower.

7. Trillium grandiflorum is pollinated by Hymenoptera insects, including honey bees, bumblebees, and wasps.

8. Trilliums are not very competitive. It’s best to avoid planting them with very aggressive species.

9. Seed germination is ‘a process’. The trillium flower produces a fruit, the seeds of which are spread about by ants and mice. Through the summer the seeds is kept warm and moist for 90 or more days. This conditioning is followed by germination when a root will emerge from the seed. In general, trillium seedlings do not produce a green leaf during their first season. The sprouted seeds are then kept damp and cool for 90 to 120 days. The seedling develops in the dark, underground, for almost a year before sending a green leaf up to find the light.

10. Trillium may die-back in the heat of summer, but don’t cut them back. Picking a trillium flower does not kill the plant but damage can result if the green leaves are taken as well. If the leaves are taken you won’t see renewed growth until the following year – which may not happen at all depending on the size of the rhizome. This fact makes the colonies susceptible when they are heavily browsed by deer. Plants will die out after several years of repeated browsing.

Bonus #11!  For best results, mulch with leaf litter. This woodland native loves a leaf covering that replicates its forest home and keeps the ground tempreature and moisture ‘just right’ (one more reason to keep those leaves in your yard).

A variety of Trillium species are available at PrairieNursery.com